Get the Body
You Want

To clearly discuss labiaplasty surgery, it is important for patients to have an understanding of the external female genitalia. Dr. Temmen prides herself on her ability to clearly communicate and educate her patients in a thoughtful and thorough manner. The following is a brief description of the external female genitalia and how it relates to labiaplasty surgery.

Labia Majora – the hair-bearing folds of skin on either side of the vagina composed primarily of fatty tissue and skin. These are sometimes referred to as the “outer lips.” Some women may have particularly fatty, large, or long labia majora giving the appearance of fullness or a “camel toe.” Alternatively, some women may have very thin or atrophied labia majora that exposes the labia minora or gives an aged appearance to the vulvar area.

Labia Minora – the soft, thin, hairless skin between the labia majora; also called the inner lips. The labia minora may be enlarged or elongated, protruding beyond the edges of the labia majora. This may cause an unattractive, undtidy appearance or discomfort with certain exercises, sex, or clothing.

Clitoral Hood – the fold of skin at the “top” of the labia minora protecting the clitoris. The clitoral hood can be enlarged or excessive causing a widened appearance to the vulva or interference with clitoral stimulation during sex.

Posterior Fornix/Fourchette – a thin band of skin at the back of the vagina. This tissue may be enlarged or elongated causing pain or an unsightly appearance to the vulva. 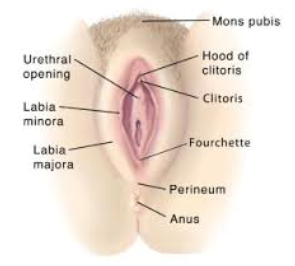